A lot of us don’t give much though to what we feed our pets. We buy some commercial pet food and assume that it is ok, that it contains all that the pet needs. But is it true? Dr. Pitcairn doesn’t think so. In Dr. Pitcairn’s Complete Guide to Natural Health for Dogs & Cats he argues that just as it is true for humans that a diet composed by whole foods is healthier, the same is true for pets.

In the first chapter he points out that nutrition is mostly ignored in veterinary school:

Yet my official training in the nutrition of dogs and cats had included little more than the admonition: “Tell your clients to feed their animals a good commercial pet food and to avoid table scraps.” Beyond that, nutrition just wasn’t considered and important part of our education. It was all about drugs and surgery.

Personally, I never heard any good reason to follow the recommendation to avoid table scraps. From what I know that’s what dogs have been eating from most of the time they’ve been evolving alongside humans. Mass-produced, machine processed pet food seems to be a relatively common concept that might stem from modernist thinking of trying to Optimize & Control Everything™. From these excerpts from The Lost History of the Canine Race:

In the latter half of the nineteenth century, as pets came to be regarded as luxury items, the question of how to best maintain ones “investment” sparked new interest in canine nutrition. Fanciers were inspired to look beyond breeding and grooming for additional ways to “civilize” and elevate the canine race.(…) Canine bodily functions were subject to the same obsessive concerns. Since the eating of meat (particularly raw meat) was natural to canines, dog experts often pointed to that as a corruptive influence that led civilized pets to lives of savage depravity. The more well bred the urban dog, the more important it was to control its behavior through diet. (…) Despite recommendations for wholesome canine suppers of vegetables, whole grains and fresh meats, consumer interest in controlling the “inner nature” of dogs persisted. The notion of a mass-produced, machine processed pet food - inexpensive, easy to serve and touted as superior to home cooking - was increasingly appealing to busy urban consumers and commercial pet food became part of the new status associated with being “modern.”

And as it happens today, the producers of dog food were fond of saying that their product was totally the best:

Shortly afterward, he turned his attention to creating the first commercially produced biscuit expressly for dogs, unveiled in 1860 as Spratt’s Patent Meat Fibrine Dog Cakes. A baked mixture of wheat, beet root, and vegetables bound together with beef blood, Spratt’s cakes were touted as a superior way to feed pets. (…) Within a few years other prepackaged foods appeared often employing marketing techniques first used for patent medicines. Their biscuits, breads and cakes not only gave a sheen to the dog’s coat, but could prevent everything from tapeworms to distemper - claims bolstered by the paid endorsements of veterinarians such as Dr. A.C. Daniels, who willingly affixed his good name to a “Medicated Dog Bread” which unlike the competition was “free from cheapening ingredients such as talc powder and mill sweepings.”

And even then companies were encouraging people to “avoid table scraps”!

Pioneering pet-food makers tried to discourage consumers from supplementing their products with other foodstuffs. Fresh beef, Spratt claimed, could “overheat the dog’s blood,” and even the most wholesome ‘table scraps will break down his digestive powers [making] him prematurely old and fat."

But too many dog owners persisted in supplementing commercial dog food with table scraps, so companies retooled their marketing strategies. Advertisements ceased to even acknowledge the idea of home cooking for dogs and put an increasingly derogatory twist on “scraps”, while commercial foods were powerhouses of proteins, minerals and vitamins. At a 1964 meeting of the Pet Food Instititute (PFI) a Washington-based lobbying association representing American companies, George Pugh, an executive of Swift and Company (makers of Pard dog food) described ongoing efforts to discourage the feeding of anything but commercial dog food. Thanks to PFI press releases, he reported to industry colleagues “we got stuff in one thousand daily and weekly papers.” PFI staff also “assisted” Good Housekeeping, Redbook and fourteen other popular magazines in the preparation of feature articles about dog care, which incidentally advocated commercial pet food to the exclusion of everything else. And a script prepared and distributed by PFI, warning of the dangers of table scraps, got air-time on ninety-one radio stations throughout the country.

By 1991, sales of pet food had topped out at over eight billion dollars. Canned and kibbled fare occupied more supermarket shelf space than breakfast cereal or baby food. A whole generation of consumers now could not recall a time when pets ate anything but commercial dog food, and the campaign to discourage alternative food sources had been so successful that some consumers were fearful of feeding their dogs even a piece of soda cracker.

I felt this myself.

So, my model of what happened is that the lobbying by the pet food industry was so successful in changing western society’s perception that it even affected schools of veterinary medicine. But just because commercial pet food was lobbied for, it doesn’t mean it’s not good for your pet, right? Let’s see what Dr. Pitcairn has to say about that

There may be exceptions among some of the higher-quality brands, but the source for most pet foods boils down to this: animal and plant wastes that cannot be used for human consumption.

And citing Ann Martin, author of Food Pets Die For:

In all my years of research into this industry I have found little, if any, ingredients that are used in most commercial pet foods that would be considered anything but garbage

The next paragraphs list all the nasty-sounding stuff that was found going into commercial pet food. Farm animal’s abbesses and tumors. Uteruses and fetuses of pregnant animals. Garbage from grocery stores. Grease and spoiled food from restaurants. Even euthanized dogs and cats, including their collars and euthanasia solution. The list goes on a on making me feel bad that I ever gave my dog any type of commercialized pet food. What we are giving to our pets would be totally not ok culturally if it was being given to humans.

But the truth is… most dogs still look healthy? From the author:

In fact, it’s really a bit amazing that many animals do as well as they do, considering what they eat.

Which sound like evidence that the horribly sounding stuff is not that bad? Dr. Pitcairn seems to think that most commercial pet food is:

(…) a serious health issue for companion animals, who have been suffering from a rise in chronic diseases, according a 2015 study of 2.4 million dogs and 480,000 cats by Banfield Veterinary Hospitals.

They are referring to the “2016 Report - What diseases are affecting dogs and cats”, found in here, which shows results for 2006-2015. It shows an increase of Diabetes Mellitus in dogs and cats in that period: 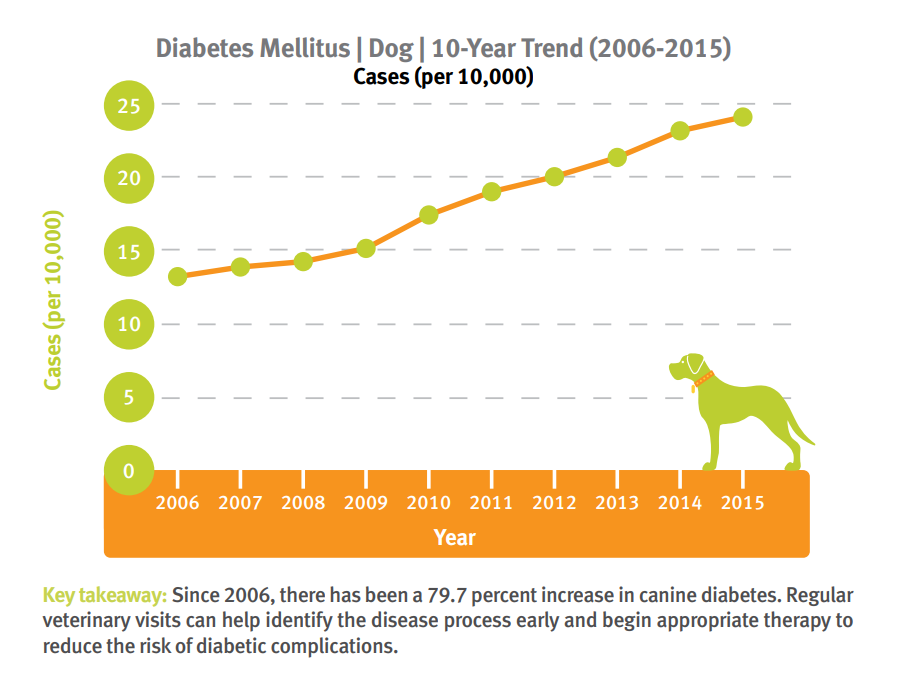 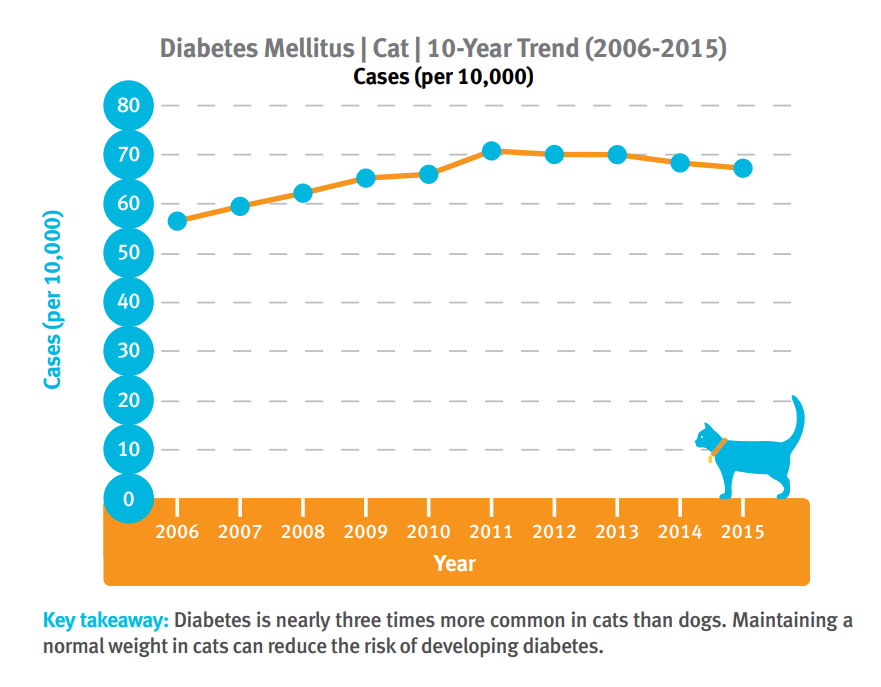 After going though the source, I feel a little misleaded by the doc. He tells us of a “a rise in chronic diseases” but the only chronic disease showing an increase in the report he mentions is Diabetes Mellitus. And the report doesn’t seem to paint a picture of things getting worse in general. And even if it did, not sure if we could point the finger at commercial pet food: report covers years 2006 to 2015, while commercial pet food was introduced 150+ years ago.

So, after reading a couple of chapters of the book and doing some research here’s my current thinking:

Ok, if we agree that we should try to avoid commercial pet food, what exactly should we feed our pets? Well, it seems it is simpler than it might seem: if you already eat a generally healthy diet, your pet can also eat that (with probably some adjustments needed if you’re vegan). This is not surprising considering it is just the kind of diet dogs were having before commercial dog food existed. Having said this, the author really incentives the readers to move to a more plant-based diet, not only for nutrition reasons but also for environmental and ethical reasons. He even shows a bunch of cases of healthy vegan cats and dogs!

I’m going to be less nervous about giving my dog “human food” but I’ll also not be too extreme with the avoidance of commercial food.

It was good to have a non-mainstream perspective on pet food from someone who has been practicing veterinary medicine with a focus on nutrition for 20+ years. Having said this, I’ve found the epistemic standards of the author not that good, as exemplified above in the case of the “rise in chronic diseases”.